Things You Need to Know about Social Security in the USA 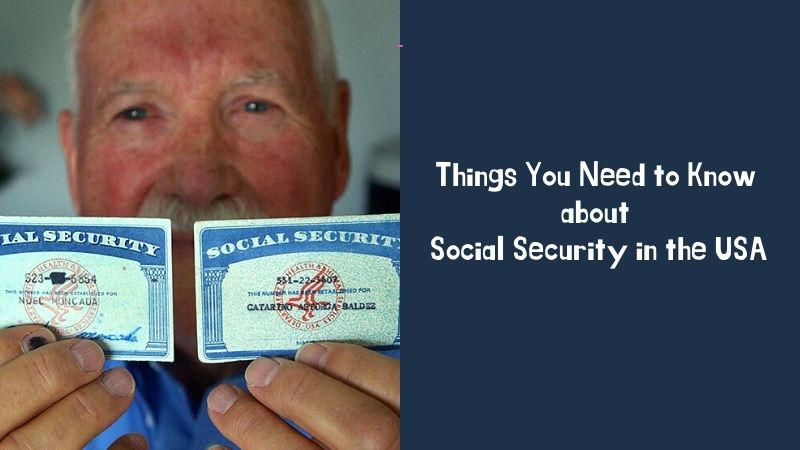 Social Security Number (SSN) is a document that looks like a small piece of thick paper with a nine-digit number and name of the holder. This is one of the most important documents that you must have if you want to live comfortably in America. And if you’ve recently moved to the US, getting your SSN early should be on your top priority list. This document is issued once and for life, its number remains unchanged. Most US residents know these nine digits by heart, like a telephone number. This is because they have to use SSN much more often than, for example, a passport. The meaning of the document (and the number assigned to you) is so that the tax service can control your contributions to the state treasury. You have probably heard that the tax laws in the United States are extremely strict. Also, based on the total amount of taxes paid, the amount of the pension supplement is formed. The retirement age in the United States is 65, regardless of gender.

There are three types of Social Security Number:

Having a tourist or visitor visa allows you to hope to receive only the third type of SSN and, naturally, you will not be able to work on it (at least on a legal basis). If you have a work visa or are a part-time student or intern, you will receive a second type of document.

What is SSN used for?

SSN is needed in many everyday situations: when renting a home, when getting a loan, buying things on installments. When legally applying for a job (or opening your own business), you also cannot do without this document. Knowing your personal social security number by heart will allow you to get paid medical care in an emergency, even if you don’t have a single document on hand.

How do I get a US Social Security number?

The procedure for obtaining a document (in general terms) is as follows. Suppose you recently settled in a city in the United States and your visa allows you to obtain a Type 1 or Type 2 SSN. You go online and use Google Maps to find the nearest Social Security Administration office. Then you go to the specified address having the necessary documents with you. Namely: two documents proving your identity, age and your eligibility for a Social Security number. One of them, as you might guess, is a work permit, the other is a passport.

So, you have arrived at the office building. Most likely, it will be a small room in which you will see several dozen sitting places for waiting, several windows and an interactive display. You will need to select on the display the section “get a new SSN”.

A special device will issue a ticket indicating your number in the queue. Now, while you are waiting in line (you should not, however, expect that there will be a crowd of people), you have time to fill out the questionnaire. You will find the forms at the information stand – if they run out there, you can contact the office employees in one of the windows. Another option is to download the form in advance from the Internet and fill it out at home, in a relaxed atmosphere. Filling out the questionnaire is quite simple (questions and answers, of course, are in English, the use of other languages is not provided). If you have any ambiguities, they can again be resolved by the office workers.

Questions in the SSN application form:

That’s all: all you have to do is sign and give the document to one of the windows when the turn comes. The office worker will enter the information you provided into the computer, and the process of obtaining a social security number can be considered complete. Please note: the entire procedure is completely free. Now you return home and wait for a letter with your document, which will come to your mail. The term of receipt is from a week to a month, depending on the specific city and state. The US Postal Service is quite reliable, so you shouldn’t worry about losing your letter. But even if this happens, the document can always be restored because the SSN number will already be assigned to you, and your data has been entered into the state database. Since SSN is made of plain paper, it is recommended that you laminate immediately and then store the document in a safe place. Be careful and do not tell anyone your SSN number (except, of course, when you apply for a job, etc.), as attackers can use it to, for example, get a loan in your name.

Finally, we note that in addition to the Social Security Number, there is also a document called ITIN, or individual taxpayer number, which does not give the right to work. You can use it to pay taxes if, for example, you own a house and rent out rooms.

When you see all the amounts that are regularly deducted from your paycheck, it can seem a little discouraging. Items marked FICA, SS, or OADSI are acronyms for some type of Social Security Deduction.

According to the Social Security update, employed Americans will pay up to 6.2% of their paychecks to social security programs, and self-employed workers up to 12.4%.

5 Unusual Facts about Social Security in the USA

Fact number 1: your number will go to “another world” with you

Your social security number will never be repeated. This is a unique number issued only to you and to no one else, so after your death no one will ever get this number.

To date, the government has provided over 449,000,000 numbers. However, with over a billion possible combinations of numbers, it will take a long time before the program has to think about disposing of these numbers or composing a new set.

Fact number 2: The Mexican Economy and US Social Security have something in common

The amount of money Social Security pays out each year is similar to the size of Mexico’s entire economy.

Fact number 3: Who was the first recipient of Social Security benefits?

It was Ida Mae Fuller from Brattleboro, Vermont. Everyone knew her as Aunt Ida. She received the first amount from Social Security in the early 1940s – an impressive $22.54. Now it is about $352. It’s not a huge amount at any rate, but better than nothing.

You may have heard or read on the Internet that Uncle Sam – the collective image of the United States – “attacks” and “steals” money from social security programs to pay government bills, this is not entirely true.

However, Uncle Sam does borrow money from the trust fund. According to the law, any surplus in the social security fund must be invested in US Treasury bonds, which is used to pay off government debt for other expenses.